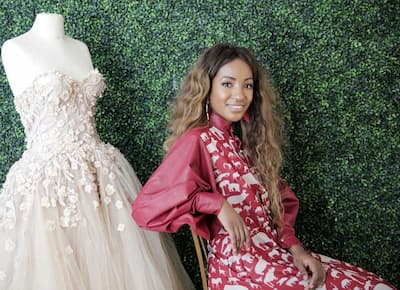 Chasity Sereal is an American fashion designer and reality tv star hailing from Houston, Texas. She is best recognized from the reality tv show Project Runway. The first episode of the19th season of the tv series started airing on the 14th of October, 2021 on Bravo. In addition, Sereal is the owner of a clothing line named after her that specializes in custom bridal gowns, evening gowns, and also luxury streetwear.

Chasity turned 31 years in 2021. The fashion designer was born in 1990, in Houston, Texas, the United States. Further details about her exact date of birth are under review and will be updated as soon as they are available.

The fashion is exceptionally beautiful standing at an average height and of moderate weight. Her dark brown eyes are just some of her distinctive features. Details about her height, weight, and body measurements are currently under review.

Sereal originally comes from Houston. Texas, the United States. She was born to her mother and father whose names are yet to be disclosed. Chasity’s father died when she was only 12 years old and her mother had to raise her alone. Growing up, her father was her greatest inspiration since he was an artist.

Chasity is a wife and proud mom of two daughters. Although she has not disclosed the name of her husband, the two have been married for years now. Further information about her marriage is out of reach.  She regularly posts photos of her together with her daughters on her social media accounts.

Sereal is an accomplished fashion designer who started her career while still in high school. She now has a chance to grow her name in the fashion industry after joining the 19th season of Project Runway airing on Bravo.  The tv series which premiered on the 14th of October 2021 features 16 talented fashion designers from different towns and countries.

Nina Garsia, Brandon Maxwell, and Elaine Welteroth who have previously starred in the show, return as the judges. Christiano Siriano is on the show as a host and mentor for the fashion designers. The winner of the show gets to showcase his or her collection on New York Fashion Week and win a cash prize of $250, 000.

Sereal fell in love with fashion and design at a young age. When she got into high school, she started designing senior prom dresses. In an interview, the fashion designer disclosed that she learned most of her skills in fashion and designs from Youtube. Her clothing line, “Chasity Sereal” was launched in 2009.

Her line specializes in custom bridal gowns, evening gowns, and also luxury streetwear. Since the launch of her brand, two of her collection have been showcased at New York Fashion Week

Sereal’s information about her net worth is still not disclosed to the public. Most of her income comes from her career as a fashion designer and her clothing line “Chasity Sereal” which was launched in 2009.