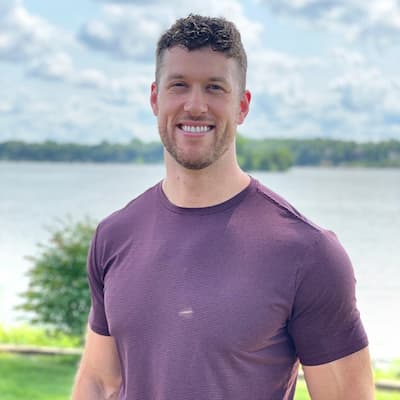 Clayton is a reality star born on the 29th of April 1993, in Eureka, Missouri, United States. This makes the orthopedic sales representative 28 years old as of 2021.

Clayton is a man of tall stature standing at an attractive height of 6 feet 5 inches (1.96 meters). The former football player weighs 116 Kgs.  On to his body measurements, the exact details are not available. However, he is very muscular and fit. As it appears on his social media accounts, the reality star works out more often. His dark brown colored hair and hazel eyes go perfectly together.

Clayton hails from  Eureka, Missouri, the United States where he was born and raised. Although he is yet to disclose his parents’ names, the reality star regularly shares photos of his mom and dad on his Instagram account. Clayton is very close to both his mom and dad. He has two brothers; Nate and Patrick.

The 28-year-old has been quite discreet about his past relationships. Therefore it is not clear if he has been in a recent relationship before joining The Bachelorette.  He describes his ideal woman as funny,  independent, and intelligent. He is also looking for a gym partner in his ideal woman.

Echard began his football career while still in sixth grade. He played in the position of defensive lineman for the varsity football team. Clayton was in his senior year at Eureka High School. He joined the University of Missouri where he was chosen as a walk-on member of the Missouri Tigers football team.

In 2012, Echard appeared in the Southeastern Conference academic honor roll. He was then moved to tight end from defensive position when the 2013 season started. He played both positions for the 2014 season. For the 2015 season, he played in the tight end position. He was signed with Seattle Seahawks but got cut from the team in September 2016.

Echard’s net worth is still under review. However, he makes a good income from his job as an orthopedic sales representative. He appears on the 18th season of The Bachelorette.