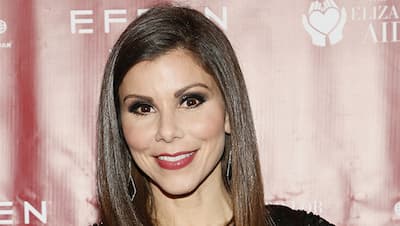 Heather Paige Dubrow born in New York, is an American reality tv personality and actress. She is widely recognized for starring in the reality tv show The Real Housewives of Orange County. She joined the show in 2012 and took a break from it in 2016. In 2021, Heather joined the cast of the 16th season of the show.

Heather stands at an average height measuring 5 feet 7 inches (1.71 meters). Her weight measures 59 Kgs (130 lbs). Moreover, her hair is brown as well as her eyes. Further details about her body measurements are under review.

Heather was born in The Bronx and raised in Chappaqua, New York. Her father’s name is Conrad S. Kent. Her mother’s name is yet to be disclosed. Dubrow is a fifth-generation American of Jewish ancestry. Her brother-in-law Kevin Dubrow was a heavy metal singer.

Heather married her husband Terry Dubrow in 1999. Terry Dubrow is a plastic surgeon and reality tv personality known for starring in the tv show Botched. The two have four children together; twins Nicholas and Maximillian born in 2003, Katarina, and their last child Collette. Their daughter Maximillian came out as bisexual at the age of 16.

Heather joined The Real Housewives of Orange County in its seventh season in 2012. She, however, left the show in 2016 after the 11th season. In June 2021, it was announced that she will be rejoining the tv series for its sixteenth season which premiered on December 1, 2021.

As an actress, Heather has had multiple notable roles in various movies and tv shows. From 2000-2002, she played the main role of Lydia DeLucca in That’s Life. She started her career in the mid-1990s after appearing in tv shows and movies including; Married… with Children, Nowhere Man, Life with Roger and Carly.

Heather hosts her own podcast called Heather Dubrow’s World. In the podcast, she will be discussing a wide range of topics from health, wellness, beauty, parenting, travel, and style. She also hosts another podcast with her husband Terry Dubrow called Dr. and Mrs. Guinea Pig with Heather and Terry Dubrow.

As of 2021, Dubrow’s net worth is estimated to be $50 million. She has been able to make her fortunes from her career as a reality tv personality and actress.