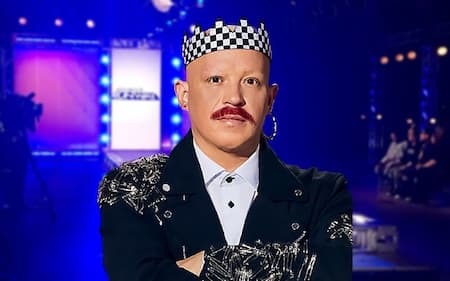 A Puerto Rican-American fashion designer, Octavio Aguilar is also a reality tv personality appearing in the 19th season of Project Runway. This season of the reality show premiered on the 14th of October 2021 on Bravo TV.

Aside from the show, Octavio is an accomplished fashion designer with his own label known as “Dope Tavio”.  Before fully venturing into fashion and design, Octavio worked as an interior designer for about 10 years.

Aguilar is a man of average stature and average body weight. His height ranges from 5 feet 7 inches to 5 feet 8 inches. His eyes are attractively brown in color.

Octavio is of Puerto Rican descent born and raised in New Jersey. The fashion designer was born to his mother and father whose names are yet to be disclosed. However, his mother solely raised him, and therefore, he has a special bond with his mom.  His father has always been out of the picture and therefore, the 42-year-old has not mentioned him in any case. His mother has always supported him and his career since he was young.

Octavio is a highly discreet person, therefore, not much about his personal life is known to the public. The 42-year-old has no history of past relationships or even his current relationship. Although he is now a reality star appearing on the tv show Project Runway, the fashion designer has maintained a low profile life.

The first episode of the 19th season of the fashion reality tv show Project Runway aired on October 14, 2021, on Bravo TV. The show features Nina Garsia, Brandon Maxwell, and Elaine Welteroth as judges. fashion designer Christian Siriani returned as a host and mentor.

All 16 designers appearing on the show including Aguilar, are contesting for a chance to win a cash price of $250, 000 and also create a collection for the New York Fashion Week. Aguilar fell in love with fashion and design when he was still a young boy.

He always knew that he wanted to pursue a career along that line. He received his first sewing machine at the age of 12. After receiving the machine, he started making ‘90s clubwear. Soon he opened up his first own shop.

He took a year to study fashion at the Art Institute of Fort Lauderdale. After some time, he decided to change careers and became an interior designer. After 10 years, he came back to the fashion and design world launching his own label Dope Tavio.

His unique designs have gained much recognition over the past years. The designs have been featured in a number of fashion editorials and music videos. Octavio has worked with several celebrities including; Sharaya J.,  Eryka Badu, and Janet Jackson.

Octavio is yet to disclose any financial matters to the public. However, the fashion designer appears to make a good income from his label Dope Tavio and his appearance on Project Runway.