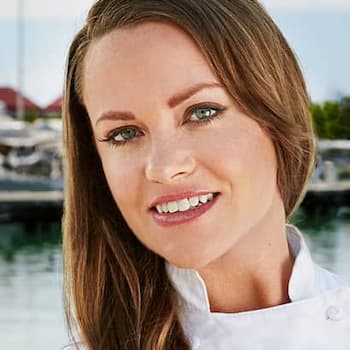 Born and raised in Tampa, Florida, Rachel Hargrove is an American reality tv star, Yacht Chef, and an Ayurvedic Practitioner. The 38-year old gained recognition for her role as a Yacht Chef on the 8th season of Below Deck. She now returned to play the same role on the 9th season of the reality show airing on Bravo TV.

As young as she seems, the 38-year-old reality tv was born on the 17th of February 17, 1982, in Tampa, Florida, United States. She always celebrates her birthday on February 17th surrounded by her loved ones.

Rachel is an exceptionally beautiful woman with a height measuring 5 feet 7 inches ( 1.70 meters ). She has a lean body with a weight of 54 Kgs.  Her hair color usually changes from red to dark brown. In addition to her distinctive features, she has beautiful hazel eyes.

As a reality star, like most stars, Rachel had a bit of a publicized relationship last season. She often talked about her long-distance relationship with her now ex-boyfriend Vincenzo. Since her ex-boyfriend dint work in yachting, their relationship went through a rough patch. This created some distance between the two lovers.

She disclosed that, during season 8, her ex-boyfriend wanted her to stop filming and working in boats. She went on to reveal that, that was the cause of their breakup. It was during her appearance on Watch What Happens Live With Andy Cohen After Show that she disclosed all these. Rachel might be single now since she is also back to filming season 9 of the reality show Below Deck.

Below deck is a well-known reality tv show airing on Bravo since its original release in 2013. Its latest season, season 9 just premiered on October 25th, 2021 bringing back old faces and of course new faces too. Hargrove is one of the old faces on the new season.

She had previously appeared on the 8th season of the reality show which premiered on November 2, 2020. She however quit the show before its last episode after a few problems she had with the guests and her crew members specifically Eddie and Francesca Rubi.

Rachel claims to be a self-taught chef even though she went to the Culinary Institute of America. Since has traveled around the world to countries like Thailand, Japan, India she has learned different cuisines. Rachel has previously held an apprenticeship at the Michelin-starred restaurant Quatro Passi in Nerano, Italy.

A successful yacht chef and a reality star, Hargrove seems to be making a good name for herself and on top of that, good money. She has, however, not given us a glimpse of her financial status therefore, her net worth is still under review.