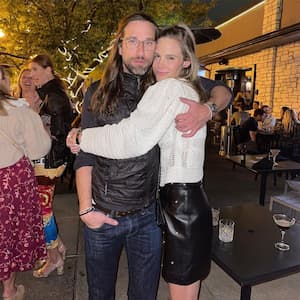 A native of Pennsylvania, Cuffe Bidden Owens is an American lawyer and celebrity known as the nephew of the USA president Joe Biden and the son of Valerie Biden Owens. Valarie is Joe Bidden’s sister, close adviser, and campaign manager. Owens has added to his popularity after his recent wedding to reality tv star Meghan King.

Regarding his body measurements, Cuffe appears to be quite tall. He is even taller than his wife Meghan who stands at a height of 5 feet 9 inches. However, information about his measurements is under review and will be updated.

Owens hails from Pennsylvania. He was born to his famous parents Valerie Biden Owens and John T. Owen. His mother who is President Joe Biden’s sister is a political strategist, campaign manager and also served as an educator. Cuffe is not the only child of his parents, he has two sisters named Valerie James Owens and Catherine Eugenia Owens.

Owens was married to reality tv star Meghan King. The two tied the knot in October 2021. Their wedding came after dating for only less than a year. Their wedding ceremony took place at Cuffe’s childhood home in Kennett Square, Pennsylvania. President Joe Biden and the first lady Jill Biden were among the 50 people who attended the wedding.

Meghan introduced her ex-husband on her social media accounts in September 2021. Meghan was previously married to Jim Edmonds and they had three kids together. Their marriage lasted only 5 years from 2014 to 2019.  On the other side, Cuffe has not been married before and does not have kids.

Owens and Meghan King are reportedly separated. The former “Real Housewives of Orange County” cast member Meghan King broke the news of their split on her Instagram. Their split came just two months after they tied the knot. Sources reveal that some of the reasons why they split up were that they did not fully get to know each other and that King was not ready yet to move to California since her children and ex-husband Jim Edmonds are based in St. Louis.

Cuffe is a successful lawyer. The 42-year-old is part of Felker Toczek Suddleson Abramson LLP. He studied at Georgetown University graduating with an undergrad. After graduating, he joined the University of Southern California for law school.

In 2009, Cuffe was admitted to the California Bar becoming an active member. In addition, he also works with his mother Valarie Biden Owens. He helps with booking her event appearances and other political things. He is, however, not directly involved with politics.

Details about Owens’s net worth are still under review and will be updated as soon as they are available.