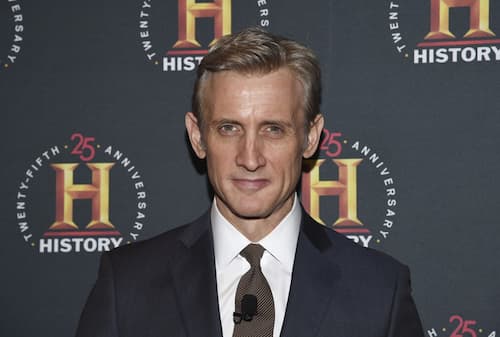 Abrams regularly contributes to ABC News. He has previously hosted Live PD on the A&E cable network. In addition, Dan is the creator and host of Court Cam. He has previously anchored Nightline and served as a chief legal correspondent and analyst for NBC News as well as the general manager of MSNBC.

The 55-year-old stands at an estimated height of 5 feet 9 inches. He is of moderate bodyweight that matches well with his height. Dan takes care of his body by regularly working out and eating healthy food. He is a vegetarian.

Dan was born Daniel Abrams in Manhattan, New York where he was also raised. He is the son of Floyd Abrams and Efrat Abrams. His father Floyd is a famous attorney and an expert on constitutional law. He is a legal representative at Cahil Gordon & Reindel. Dan has one sibling named Ronnie Abrams. In 2011, Ronnie was nominated for a Federal judgeship by Barak Obama. On March 23, 2012, she received her commission.

The 55-year-old is reportedly married to Florinka Pesenti. Although there is no information on when their wedding took place. Florinka is a public relations associate best known for being the first female winner of The Amazing Race. She competed in the third season of the show. The two met back in 2009 at a party. Abrams had his first child Everett Floyd Abrams with Florinka in June 2012. Dan has two children.

Abrams has two children. His first child with his wife Florinka is Everett Floyd Abrams and was born in June 2012.  He has not disclosed any information about his second child. However, Dan frequently posts pictures of his children on his social media.

In 2003, Dan became sick and in 2004, he was diagnosed with testicular cancer. He kept his diagnosis private, therefore, most people did not know that he was sick. Due to the effects of medication and cancer, Dan lost a lot of weight. He went through surgery to remove the tumor from his testicles and lymph nodes from his stomach. After the surgery, he was cancer-free. He made a public announcement about his cancer in September 2004.

Dan began his career in 1994 after he became a reporter for Court TV. He covered many stories including the O. J. Simpson murder trial and the assisted-suicide trials of Dr. Jack Kevorkian. In 1997, he joined NBC News as a general assignment correspondent. In 1999, he became a Chief Legal Correspondent. He later landed his own show at MSNBC. In 2001, The Abrams Report began airing.

Dan served as the General Manager of MSNBC from June 12, 2006, until October 2007. After leaving, he started his own show Live with Dan Abrams which was later renamed Verdict with Dan Abrams. In 2008, Dan became a substitute anchor on NBC’s Today Show. Dan left NBC in 2011 and joined ABC as a Chief Legal Analyst and substitute anchor on Good Morning America. In 2013, he became ABC’s Chief Legal Affairs Anchor and anchor of Nightline.

In October 2016, Dan became the host of the A&E show Live PD. He joined Newsnation on September 27, 2021, to host the Dan Abrams Live show. Abrams alongside Michael Lewittes launched Gossip Cop on July 29, 2009. The site was acquired by Gateway Blend. The same year, Dan started a news site called Mediate and in 2010, he launched Geekosystem. His other sites include; Styleite, SportsGrid, The Mary Sue, LawNewz,  and Whiskey Raiders.

In 2018, Dan started a Christian TV streaming service called Ambo TV. As an author, Dan has written several books. In March 2010, he published his first book Man Down: Proof Beyond a Reasonable Doubt That Women Are Better Cops, Drivers, Gamblers, Spies, World Leaders, Beer Tasters, Hedge Fund Managers, and Just About Everything Else. Dan has published articles in The American Lawyer, The Wall Street Journal, USA Today magazine among others.

As of 2021, Abrams has an estimated net worth of $25 million. He has been able to accumulate his riches from his long successful career as a media entrepreneur, television personality, author, and legal commentator.