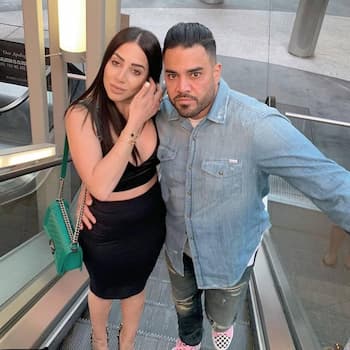 Paulina Ben Cohen is an American celebrity known for appearing on Shahs of Sunset alongside her fiance Mike Shouhed a real estate agent and reality television personality. Ben is also best recognized for her marriage to her ex-husband Tal Bahari an Iranian businessman and millionaire.

Although information about her career is not clear, her LinkedIn states that she works at a clothing company in Beverly Hills called CO2. In addition, she is also a blogger and uses her large Instagram following to promote products from different brands including T and T Beads.

Born and raised in the United States, Ben has not yet disclosed information about her age and date of birth.

The beautiful reality tv personality appears to be of average height and moderate weight. Her silky black hair and beautiful brown eyes go perfectly together. Further detailed information about her height, weight, and body measurements will be updated as soon as it is available.

Unlike her co-stars, Ben Cohen does not like displaying her private life in public therefore information about her parents is still under review. Being born and raised in the United States, Ben holds an American nationality. She is, however, of Persian descent. Her brother Pej Ben Cohen is a trial lawyer and has three daughters.

Ben Cohen was previously married to her ex-husband Tal Bahari an Iranian businessman and millionaire. The two were married for years and even share two children together; a boy aged 8 and a girl aged 5.  Tal runs multiple businesses and is reportedly the CEO of Cavalin. Inc in Los Angeles. After their divorce, Paulina is currently in a relationship with Mike Shouhed.

After dating for about three years, 42-year-old Mike Shouhed finally popped the question and asked Paulina to marry him. The two announced the great news during season 9 of the Shahs of Sunset reunion. Mike went on to disclose that he managed to propose to Paulina with help from her son in Hawaii. Ben and Mike met shortly after the divorce from her ex-husband Tal Bahari. This will also not be Mike’s first marriage. He was previously married to Jesica parido.

Information about her exact net worth might be unclear but her ex-husbands net worth and that of her current fiance are widely known. Mike, her current boyfriend is a real estate agent with a net worth of about $3 million. On the other side, her ex-husband is a businessman and a millionaire too.