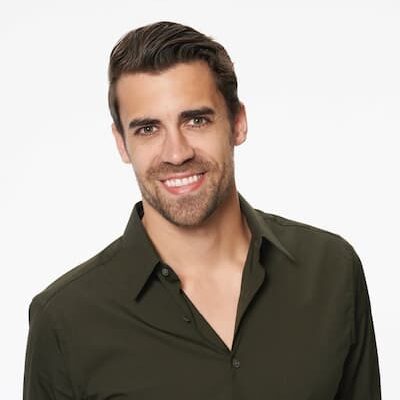 Hailing from Munroe Falls, Ohio, Rick Leach is an American reality tv star and a medical sales representative based in Los Angeles, California. He is one of the eligible bachelors contesting on the 18th season of the reality tv show The Bachelorette.

Rick is a blessed man when it comes to looks and appearances. He is a man of tall stature measuring 6 feet (1.83 meters). Although details about his weight and body measurements are not available, Rick is very fit with an athletic body.

About his family, Rick was born in Munroe Falls, Ohio to his parents whose names he has not yet disclosed. He gives his deceased father lots of credit for raising him to be the man he is today. Sadly, his father passed away three years ago. His mother was a kindergarten teacher. Rick has been raised alongside his brother Sean. He has a cousin named Leah.

Despite the lack of information about his past dating life, Rick refers to himself as a hopeless romantic, one who finds romance in the smallest things in life. Leach joined the dating show with hopes of finding himself true love and a woman he could settle down with.

In 2010, Leach enrolled at Walsh University, DeVille School of Business. He graduated with a Bachelor of Arts degree in marketing in 2013. In 2019, he joined Loyola Marymount University where he is currently pursuing his Executive MBA. He will be graduating in 2021.

Leach happily joined the cast members of the 18th season of the reality tv show The Bachelorette to contest for a chance to win the heart of Michelle Young the star of the show. The show which premiered on the 19th of October 2021, features 30 eligible bachelors all seeking to please Miss Young. Michelle Young is a native of St. Louis Park, Minnesota currently working as an elementary school teacher. The 28-year-old was a runner-up in the 25th season of The Bachelor.

On matters concerning his career, Leach is a successful medical sales representative based in Los Angeles, California.  He currently works at Bioventus. He has been there since January 2018. Rick has previously worked with Poplar Health care as a Territory manager, sales representative, marketing coordinator, and marketing assistant.

As a successful medical sales representative, it is obvious that Rick makes a good monthly and annual income. However, this information is not available.