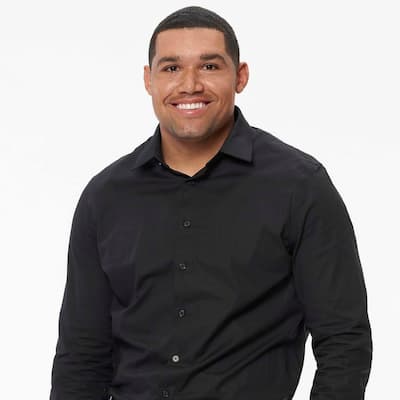 Rodney Mathews is a reality tv star born in Rancho Cucamonga, California. In addition, he is a sales representative and former athlete. He appears on the 18th season of the reality tv The Bachelorette which premiered on the 19th of October, 2021.

Rodney is 29 years old born in 1992, in Rancho Cucamonga, California. The reality star, despite now being famous, has not disclosed any more personal information including his date of birth.

The former athlete is quite tall, of above-average height.  His well built up and of average body weight. Even though the exact details about his weight, height, and body measurements are not yet documented, they will be updated as soon as they are available.

The 29-year-old was born in Rancho Cucamonga, California where he was also raised. His mother’s name is Carrie and he is very close to her.  His mother solely raised him together with his younger brother Royal. Rodney disclosed that his mother held three jobs and her own business to help him and his brother. Mathews has not talked about his father therefore there is no information about him.

Rodney is a man who prefers to keep some of his personal life private, therefore, information about his past relationships is not available. He however has hopes of finding love on the reality tv show The Bachelorette.

Mathews joined the contestants of the 18th season of the reality show The Bachelorette when the show premiered on the 19th of October 2021. The show features a total of 30 eligible bachelors all contesting for the love of the beautiful Michelle Young. Michelle is an elementary school teacher born and raised in St. Louis Park, Minnesota.

While in college, Rodney played football. He played in the defensive back position for the bulldogs. He, however, suffered a knee injury which ended his football career. In 2015, he became a Service advisor for Toyota North America. He later joined Smith & Nephew as an associate sales representative. In May 2018, Rodney was hired as an outside sales representative at Cintas where he still works.

When it comes to his finances, the reality star has not yet disclosed any information therefore his net worth is still under review.