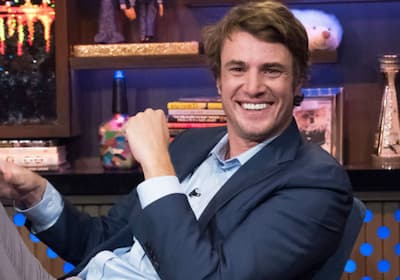 Hailing from Hilton Head Island, South Carolina, Shep Rose is an American reality tv star, author, businessman, and restaurant owner. He is best recognized for starring in the reality tv shows Southern Charm and Relationshipshep both on Bravo Tv.

Even though he looks slightly younger, the reality tv star is 41 years old as of 2021. His birth date is on September 27, 1980. He was born in his hometown Hilton, Head Island, South Carolina.

When it comes to his physical measurements, the reality star stands at an approximated height of 5 feet 9 inches (1.8 meters) and weighs about 78 Kgs (171 lbs). His great dark brown goes well with his brown eyes.

Rose hails from Hilton, Head Island, South Carolina. His parents are William Rose and France Rose. Rose has two siblings named Whitaker Rose and Katherine Rose. Rose was born and raised in a rich family. His father was a lawyer. His grandfather was involved in the steel industry from which he made lots of money. In addition to being rich, Shep’s family on his mom’s side has many lawyers. His siblings are also practicing law.

Shep is currently in a striving relationship with his girlfriend Taylor Ann Green. The two are going strong and holding on to their relationship even after Shep admitted to cheating on her. The two also confirmed that they were living together since lockdown.

Taylor works as an account executive and clinical orthodontics. As of 2021, Shep’s girlfriend has an estimated net worth of $250, 000. Prior to his loving relationship with Taylor, Shep has had relationships with Bella Clark and Chelsea Meissner.

Rose went to Hilton Head Preparatory School and later joined Episcopal High School. After graduating from high school, he joined the University of Georgia where he earned his MBA in Finance.

Shep is one of the original cast members of the reality tv show Southern Charm. He is set to appear on the 8th season of the show which is set to premiere soon. In addition, Shep landed his own spin-off show Relationshep which premiered on the 4th of December 2017.

The show featured him as he went on blind dates looking for love. Prior to starting a career in tv, Shep worked as a real estate agent until 2008. After moving to Charleston, Shep opened a restaurant together with some of his friends called Palace Hotel. In addition, Shep has his own merchandise “ShepGear”.

Since he is a man of many talents, Rose is the author of the book Average Expectations: Lessons in Lowering the Bar. The book has stories and lessons from different parts of Shep’s life including; his dating life and family.