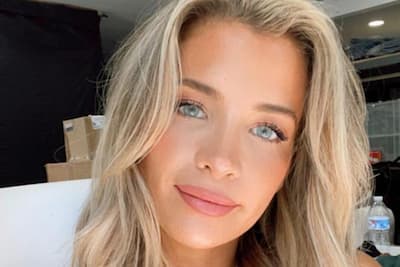 Naomie Olindo a French national, is a reality tv personality, model, fashion designer, and entrepreneur, and social media influencer. She is known for starring in Bravo’s reality tv show Southern Charm. In addition, she has her own clothing line called “L’ABEYE,” launched on June 26, 2018.

Naomie joined the reality tv show Southern Charm season 3 as a friend. She got the main role in season 6 of the show. She is set to appear on the latest season of the show, season 8 which is set to premiere soon.

Olindo also known for her attractive looks stands at an average height of 5 feet 6 inches which is approximately 1.68 meters. On to her body weight, the model weighs about 55Kgs (121 lbs). The 29-year-old body measurements are 35-24-36 inches. Olindo has previously talked about her weight loss journey. She credits Intermittent Fasting which has helped her shed some weight.

Naomie was born in France and raised there until she moved to the US together with her family. Olinda was brought into this world by her parents Joel Olindo and Carole Olindo. Olindo was not raised alone in her parents’ household, she has a sister whose name is currently unavailable.

Just like some of her fellow cast members, Olindo has had some of the most publicized relationships and one of them was with anesthesiologist Metul Shah. The two exes started dating back in 2018. After three years of dating and even moving to New York together, they decided to end their relationship. Previous to her former relationship, Olindo was dating Craig Conover, a fellow Southern Charm cast member.

Not only is she a successful reality tv star, but the model and fashionista is also well known for her style and good taste in fashion. In 2018, Olindo decided to venture into the fashion world and launched her own clothing line going by the name “L’ABEYE,”. Olindo has a large social media following which she has used to promote and popularize her label.