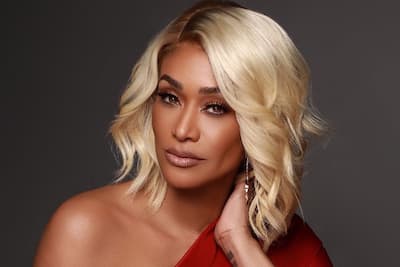 Tami Roman born Tamisha Akbar is an American television personality, model, actress, and businesswoman. She came into prominence after appearing on the reality tv show The Real World: Los Angeles in 1993. She is also best known for starring in Vh1’s Basketball Wives.

The reality stands at an approximated height of 5 feet 9 inches. She is of moderate weight, has black colored eyes and black hair. She, however, regularly changes her hair color. On to her body measurements, she measures 34-24-35 inches.

Tami was born and raised in Mount Vernon, New York. She was born to a single mother Nadine Buford. Information about her father is still undisclosed since she rarely talks about him.  After her father broke up with her mother, she remarried into a Muslim family, however, the marriage did not last.

Her first marriage was to NBA player Kenny Anderson. They tied the knot on August 26, 1994. After about 7 years of marriage, they finalized their divorce in February 2001. They share two daughters; Lyric Chanel born in 1994 and Jazz Anderson born in 1996. She is currently married to Reggie Youngblood, a 34-year-old businessman, and former NFL player. They got married in 2018.

Roman came into prominence after joining the reality tv show The Real Worl: Los Angeles in 1993. After joining The Real World: Los Angeles, Tami formed her own R&B girl group called Reality. She was the rapper of the group. The group was signed with Mercury Records. They collaborated with a producer in the song “Prisoner Of Your Love,” but it was never recorded after they ended the collaboration. The group’s name was changed to Female in 1994.

The group was part of the remake of R&B singer Joi’s song “Freedom” for the motion picture soundtrack album, Panther among other African-American girl groups like En Vogue, SWV, and TLC. The group also featured as backing vocals in a cover version of the hit song If I Were Your Woman by Gladys Knight and the Pips. Other group members are Monique Johnson, Donyell Floyd, and Carlett Martin.

Roman went on to appear as a dealer on Card Sharks and seasons 3 and 4 of One on One. She joined the main cast of Basketball Wives in 2010. Tami had her own show airing on Houston’s KCOH Radio called Tami Roman’s Love Talk & Hot Jamz alongside advice columnist and rapper Willie D of the Geto Boys and Reggie Youngblood. In 2015, she appeared on Marriage Boot Camp: Reality Stars alongside her husband Reggie. Roman owns a hair and cosmetic line.

Roman has an estimated net worth of $3.5 million.