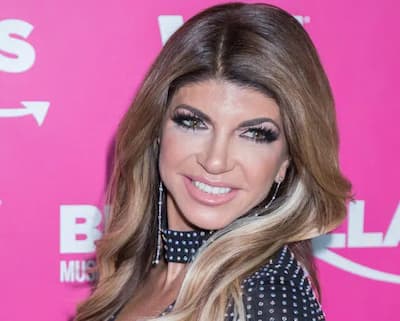 She is an American born on May 18, 1972. Giudice was born to Giacinto and Antonia Gorga who were Italian immigrants from Sala Consilina.  She is 50 years old as of 2022.

She stands at an average height of 5 feet and 8 inches. Her weight is approximately 62 kg and she has blonde hair and black eyes.

Her birth name is Teresa Gorga. She was born in Patterson, New Jersey to Giacinto and Antonia Gorga. Her parents were Italian immigrants from Sala Consilina, Campania.

She was raised alongside her brother Giuseppe Joey Gorga in the Roman Catholic faith. Unfortunately, her mother Antonia Gorga passed away in March 2017 while her father died on April 3, 2020.

Giudice attended Berkley College where she studied fashion marketing. She has yet to disclose more of her educational background.

Teresa married her childhood sweetheart Giuseppe Joe Guidice. He was an Italian citizen born in Saronno, Italy. Joe came to Paterson, New Jersey when he was just one year old. The couple had four beautiful daughters: Gia, Gabriella, Milania, and Audriana.

After 20 years of marriage, it was announced that Teresa and her husband had separated in December 2019. This was a result of infidelity rumors and prison convictions.

In July 2020, Teresa got into a relationship with Luis Ruelas. In September 2020, Teresa filed for a divorce which was finalized. The couple got engaged in October 2021 and tied the knot in August 2022.

Guidice has been a cast member of The Real House Wives of New Jersey since season 1. In addition, she has also co-authored three successful cookbooks which were inspired by her mother’s cooking recipes.

Moreover, Guidice also created her own fashion line called Fabellini. Consequently, in May 2017, Guidice together with Joe Gorga and Melissa Gorga opened a restaurant named Gorga’s Homemade Pasta and Pizza. The restaurant was located in East Hanover, New Jersey but was shut down in January 2018.

In November 2021, Guidice starred in The Real Housewives Ultimate Girls Trip which featured various women from the show.

She is a television personality and author with a net worth of $ 500,000. Guidice became famous when she starred in The Real Housewives of New Jersey.