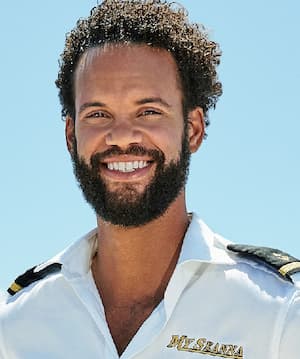 Jacksonville is the hometown of Wes O’Dell a reality tv star and a deckhand. He appears on the 9th season of the reality tv show Below Deck airing on Bravi TV. The show made its premiere on the 25th of October, 2021. Wes currently owns and runs the Nightwind II Charters, a ship he previously worked on as a captain.

On matters concerning his body measurements, the reality star is 6 feet 1 inch tall. His weight measures 75 Kgs. Curly deep brown hair and deep brown eyes are some of his other distinctive characteristics while others might not be available at the moment.

A Jacksonville, Florida native, wes was born to his parents; mom Jenny O’Dell and dad Rick O’Dell. Further details about the parents are not yet provided by the reality star due to his discreet nature. Since there’s a lack of enough information surrounding his family, it is hard to determine how his childhood was. However, he grew up with his two brothers Zachary James and Derek Kincaid.

When it comes to his personal life, O’Dell is very private and has preferred to keep it away from the public, therefore, his past dating life is unknown to us. However, Wes has sparked some relationship rumors with fellow cast member and stewardess Jessica Albert. The two are yet to confirm their relationship but viewers already feel that there might be something between them. This will not be the first boatmance since the crew members are known to hook up.

Below Deck is O’Dell’s first shot at reality tv and so far so good, he is nailing it. The show that premiered on the 25th of October 2021 follows a crew led by their Captain as they journey through Saint Christopher Island or better known as Saint Kitts which is one of the two Caribbean islands in the West Indies. Eddie Lucas, Rachel Hargrove, and Captain Lee Rosbach all returned for the 9th season of the show.

In addition, Wes is the owner and operator of his ship called Nightwind II Charters in St. Thomas, Virgin Island. Before purchasing the ship in February 2020, Wes used to work there as a captain after being promoted from First Mate in 2013. He has previously worked at Classic Cruises of Newport-Home to Schooner Madeleine & Rum Runner II” and “New Horizons & Breakaway Charters“, as a captain.