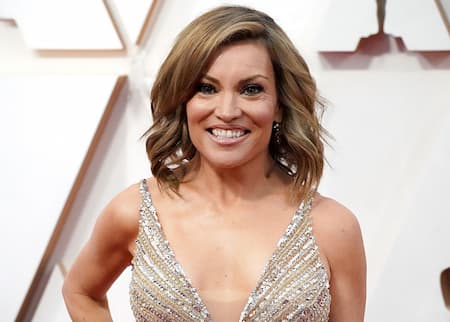 Born in Georgia, Catherine “Kit” Hoover is an American broadcast journalist, television personality, and sportscaster. Hoover is the host of Access and co-host of Access Live. Prior to her current positions, she worked for ESPN and Fox News Channel.

Hoover has guest-hosted The View, worked as a correspondent for TV Guide, hosted Real Simple Life on TLC, and hosted Six Flags TV. In addition, she was a sideline reporter on Shaq Vs.

Kit is 5 feet tall which is approximately 1.52 meters. Her weight measures 56 Kgs. Her body measurements measure 36-23-35 inches. She has dark brown hair. However, she sometimes changes her hair color. Her eyes are dark brown too.

Kit was born in Atlanta, Georgia where she was also brought up. The tv personality appears to be very private about her life therefore, there is no available information about her parents and siblings if she has any.  However, this information will be updated as soon as she discloses it.

Hoover is married to her husband Crowley Sullivan former director of programming and acquisition for ESPN. Although she has not yet disclosed information about their wedding date, the two have been married for years. Together they have three children; Hayes, Campbell, and Crowley Sullivan.

Hoover made her tv debut in 1995 when she joined the cast of MTV’s reality tv show Road Rules: USA – The First Adventure. The show ran from July 19, 1995, to May 9, 2007. It focused on a group of six strangers ranging from 18 years to 24 years traveling in an RV. They go from one location to another guided by a set of rules and missions to complete. Kit later became an entertainment correspondent for American Journal in 1997.

In 1999, Hoover became a correspondent for Fox Broadcasting Company’s newsmagazine FOX Files. Further, she was a correspondent for The Pulse and Celebrity Spotlight. She was a host for Fox Rules with Kit Hoover. Kit joined ESPN in August 2003. She co-hosted ESPN2’s live morning show, Cold Pizza. In 2004, she appeared as a judge on ESPN’s reality contest Dream Job.

She was also a lead Feature and Field Reporter for the tennis events like the Australian Open, Wimbledon, and the French Open. As a co-host for Cold Pizza, she covered major events like; the 2004 Summer Olympics, the 2004 Super Bowl, the 2005 Super Bowl, and the 2004 NBA Finals. Kit served as a correspondent for the TV Guide Channel from October 2006 to July 2008.

Hoover has been the host of Six Flags TV and TLC’s Real Simple, Real Life. She became a co-host for Access Hollywood Live on September 13, 2010. Kit made her first appearance on Shaquille O’Neal’s sports reality television program Shaq Vs on August 3, 2010. She worked as a sideline reporter.

The television personality reportedly has an estimated net worth of $5 million.